Worried about a child?

If you have immediate concerns about the safety of a child you should get in contact straight away, using the numbers below: 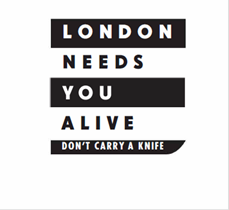 London Needs You Alive is an anti-knife crime campaign run by the Mayor of London, Sadiq Khan. Part of the ‘Protecting and Educating Young People’ strand of the London Knife Crime Strategy, it aims to reduce the number of young people using and carrying knives in London by reinforcing their sense of worth.

London is the best city in the world – full of creativity, possibility and talent. It is also one of the safest. But knife crime is tragically ruining far too many lives, devastating communities and leaving families bereaved.

The primary target audience for the campaign are those most at risk of knife violence, 13 – 16 year olds in boroughs with the highest level of knife crime.

Young Londoners are our city’s future leading musicians and artists, sportsmen and women, comedians, scientists, politicians and entrepreneurs. They are role models to little sisters and brothers. They help make our city the most culturally vibrant in the world and London wouldn’t be London without them.

Young people should know how important they are, what they can achieve in this city and that they shouldn’t put their futures at risk by carrying a knife.

London Needs You Alive aims to alter the narrative surrounding how young people are represented and give value to how they see themselves and their role in the capital.

The campaign will look to gather Londoners and organisations who care deeply about knife crime to support London Needs You Alive and build campaign awareness and credibility.  These groups are influential with the target audience and will provide relevance and weight to the key messaging.

Print
Add to My Shortlist